STATUS OF COTTON CROP 2021-22: A CASE STUDY IN MAHARASHTRA

In Kharif season 2021-22, FASAL SALAH team carried out a study of crops grown in districts of Maharashtra. Idea was to look at the crop health by using the crop pictures sent by the farmers through FASAL SALAH App and satellite pictures, which later helps us to determine the crop yield.

Major portion of the state is semi-arid with three distinct season of which rainy season comprises of July to September. There are large variations in the quantity of rainfall within different parts of the state. Ghat and coastal districts receive an annual rainfall of 2000 mm but most part of the state lies in the rain shadow belt of the ghat with an average of 600 to 700 mm. The rainfall variations from 500 to 3000 mm have been recorded with an average of 1000 mm distributed over 60-70 days.

Out of total cultivable land in Maharashtra about 60% land is under food grain crops, and Maharashtra contribute only 5.8% production of food grains in India because Jowar is dominating crop but its yield is low (583 kg/ha). Maharashtra is major producer of Jowar and Arhar contributing 46.09 and 29.11 %, respectively to the total production of India. It is second largest producer of Cotton (22.21%), Soybean (28.14%), and total cereals (13.56%) in the country.

·         However, now it seems like that Delhi rains are once again likely to make a comeback with some heavier showers in between. These rains are likely to be isolated in nature tonight as well as tomorrow.

·         The weather system will move west northwestward and reach East Madhya Pradesh in the next 24 hours. The low pressure area will move slowly before shifting over North Madhya Pradesh and Southwest Uttar Pradesh. 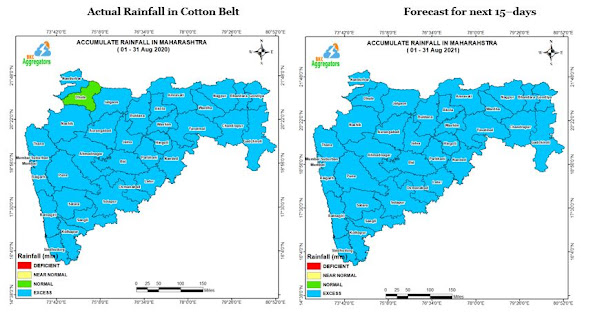 VCI is used to identify drought situations and determine the onset, especially in areas where drought episodes are localized and ill defined. It focuses on the impact of drought on vegetation and can provide information on the onset, duration and severity of drought by noting vegetation changes and comparing them with historical values. VCI value is being measured in percentage ranging from 1 to 100. The range between 50% and 100% indicates above normal condition of vegetation whereas the values ranging from 50% to 35% indicate the drought condition and below 35% indicates severe drought condition. 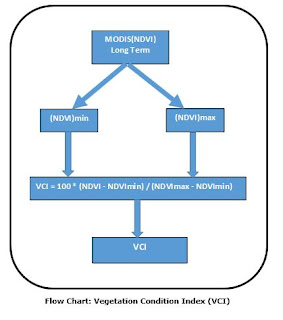 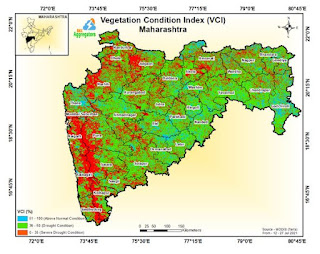 ·         Standardized Precipitation Index (SPI) shows near drought condition in majority of the district on compare with the normal during the second fortnight of July 2021.

·         Normal of rainfall in current year the index showing near unfavorable condition, while some district of Maharashtra states like Rajgarh, Ratnagiri and Satara showing above normal condition in normal year. 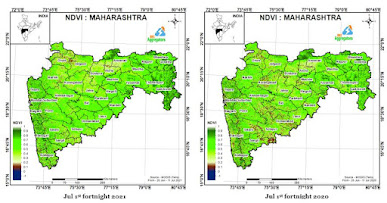 ·         NDVI depicts favorable condition throughout the state with respect to the previous year and normal year except for Dhule and Mumbai district during the first fortnight of July 2021. 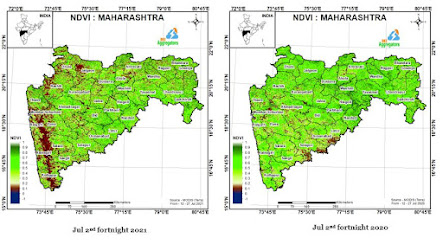 ·         Crop condition showing slightly low from last fortnight of July in majority of the district compared with the previous year 2021, Whereas it showing continue slightly lagging behind in Dhule, Mumbai and Mumbai suburban district.

·         When compared with the normal so majority of the district depicts favorable condition during the second fortnight of July 2021. 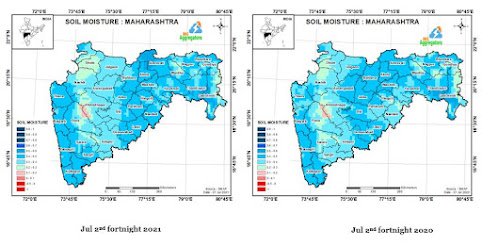 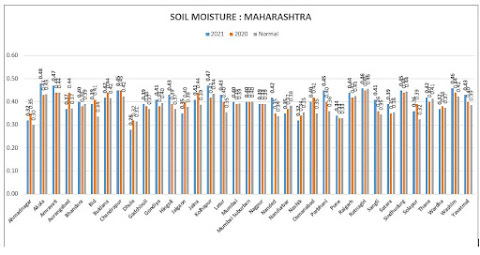 ·         Soil moisture value in the 2nd fortnight of July is better than that of the previous year throughout the state except for Ahmadnagar, Aurangabad, and Jalgaon districts.

·         Soil moisture when compared with the normal so the all over the state showing standard condition.

We at BKC Aggregators run an App called FASAL SALAH that connects us with lacs of farmers on one-to-one basis. We provide to the farmers weather linked advisories based on his soil, his variety, date of sowing using artificial intelligence Farmers also send their drop pictures for us to run ML programs to improve advisories further. FASAL SALAH is in  service of Maharashtra’s cotton farmers and address his farming problems on one-to-one basis aimed at increasing production of his crop.

Atul Dahake, a farmer at FASAL SALAH from Jalgaon district of Maharashtra told us that he has cultivated cotton in 3 acres this year, which is 1 acre lesser from previous year. Crop is completely healthy and no serious disease/pest incidence has been noted yet.

Another farmer Yogesh Dawane from Aurangabad district too reported that he has cultivated cotton in 2 acres this year and no diseases or pest above threshold has been observed. It is raining normally and weather condition is favorable too. 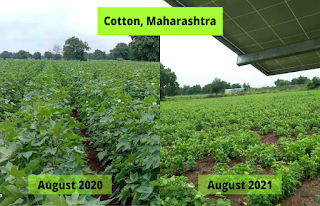 Vishal khadse from yavatmal district told us that he has started cotton cultivation for the first time in one acre. He had sown the crop in mid-June and it is not attained optimum growth. Growth is slow but no report of pest incidence is seen till now.

When asked, Rijwan Sayyed from Wardha district who has sown cotton on 8th June told Fasal Salah that the crop condition is quite good and growth is also fine. His acreage is nearly same as of previous year.

On the basis of NDVI crop health condition of Maharashtra State depicts normal condition during the month of July.

·         There is a major belt of maize and cotton in Dhule, Jalagaong and Nandurbar districts. The recent rains will be benefit these kahrif crops. It does not prove very beneficial for the short term kharif crops such as moong and urad. It may lead to drop in production of these two crops by around 30%.

·         But it is too early to comment about the crop position, processors say Maharashtra’s crop condition is better than that of the neighbouring state.

January 29, 2019
Food security in the light of climate change is a global imperative. In developing nations, the problem is exacerbated by variable weather, lack of reliable extension services to optimize yield and fair market access. In India, most farmers do not have access to weather advisory forecasts that are hyper local to their field and timely in nature. As all farming activities are heavily dependent on weather, decisions on application of fertilizers and pesticide, irrigation, and even plucking of fruits & vegetables and harvesting cannot be taken efficiently. In addition, significant crop losses, that are entirely preventable, accrue through adverse weather events. Crop advisory services, where available, are generic and not pegged to a farmer's seed variety, date of sowing, and growing conditions and hence do not dispense timely, actionable advice, directly relevant to a farmer. Likewise, market trends pertinent to their particular crop and location
118 comments
Read more

February 07, 2019
Good, better, best and never take rest until your good becomes better and better become best; it is the principle which is followed by Dr BK Singh, who is working tirelessly for the welfare of farming community across the country. After winning the Agriculture Grand Challenge (Govt. of India) 2018, BKC Aggregators has won HDFC's Digital Innovation Summit which was organized at IIM Ahmedabad, Gujarat on 31st January 2019.   FASAL SALAH provides timely and personalised agri- advisory for the welfare of farmers, a perfect solution for several problems being faced by farmers. Using dynamic crop models and artificial intelligence analytics, BKC has been able to generate an algorithm for calculation of yields well before the harvest. Thus it is possible now to have an accurate estimate of the crop before it is harvested by the farmers. Forecasting the yield before harvest is going to become strong tool for several problems associated to the losses and difficulties being face
43 comments
Read more

May 30, 2022
Recent ban on wheat export has come as a jolt for traders and farmers. The decision was taken under the purview of India’s food security concerns, in the wake of the sudden hike in domestic prices, Government decided to ban export of wheat. Later the ban was relaxed to accommodate genuine wheat export contracts backed by SWIFT certified LCs established before the ban kicked in. Euphoria among farmers to have received prices well above MSP for the first time in many years soon evaporated. One of the stated reasons for export restrictions is lower expected production during 2021-22 season because of unusually hot temperature in Feb-Mar 2022. We BKC set out to analyze the losses in yield because of hot weather . We BKC are connected with farmers in one-to-one basis through our App Fasal Salah for day-to-day advisories. We also run crop model for their crop which calculates expected yield in run time from sowing until harvest. We ran sample analysis for over hundred farmers and f
1 comment
Read more