In Kharif season 2021-22, FASAL SALAH team carried out a study of crops grown in Chhindwara district of Madhya Pradesh. Maize is the major crop of the district. Idea was to look at the crop health by using the crop pictures sent by the farmers through FASAL SALAH App and satellite pictures, which later helps us to determine the crop yield.

The maize is cultivated throughout the year in all states of the country for various purposes including grain, fodder, green cobs, sweet corn, baby corn, popcorn in peri-urban areas. In India, maize is the third most important food crops after rice and wheat. According to advance estimate, its production is likely to be 22.23 M Tonnes (2012-13) mainly during Kharif season which covers 80% area. Maize in India, contributes nearly 9 % in the national food basket.

·   In MP, undertake sowing of soybean crop only after ensuring sufficient moisture for field emergence. Undertake transplanting of brinjal and chilli in raised bed. To control attack of mite and jassids in chilli, spray Fosmite.

·         Light to moderate rain with one or two intense spells may occur over Punjab, Haryana, Delhi, Gujarat, Konkan and Goa, Chhattisgarh, parts of Madhya Pradesh, Sikkim, Mizoram, Tripura, Andaman and Nicobar Islands, and Konkan and Goa.

·          Fairly widespread to widespread rainfall with isolated heavy to heavy falls very likely over northeast & adjoining east India during most days of the week.

·         Fairly widespread to widespread rainfall with isolated heavy falls also likely over Western Himalayan Region & adjoining plains of northwest India and Uttar Pradesh during most days of the week. 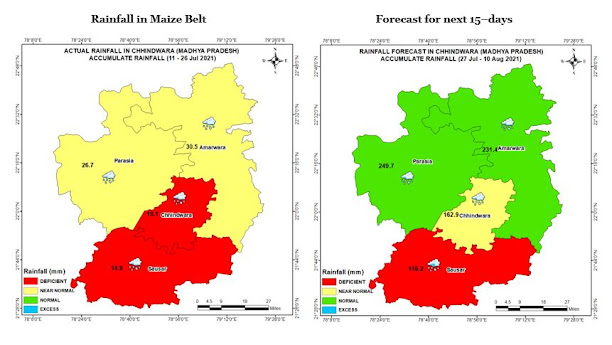 ·         As we see the previous effect in majority of the tehsils, there is a possibility of heavy rain at Parsia and Amarwara tehsils, whereas Sausar tehsils continue showing less rainfall compared to other tehsils in the next 15 days.

VCI is used to identify drought situations and determine the onset, especially in areas where drought episodes are localized and ill-defined. It focuses on the impact of drought on vegetation and can provide information on the onset, duration, and severity of drought by noting vegetation changes and comparing them with historical values. VCI value is being measured in a percentage ranging from 1 to 100. The range between 50% and 100% indicates above normal condition of vegetation whereas the values ranging from 50% to 35% indicate the drought condition and below 35% indicates severe drought condition. 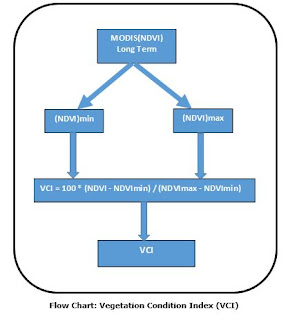 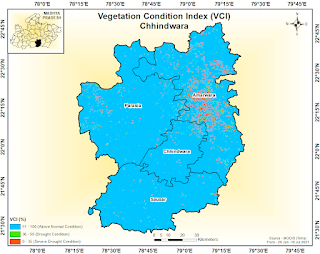 ·         Based on Vegetation Condition Index (VCI) Chhindwara district showing near normal condition while some parts of Amarwara tehsil showing deficit condition compared with other tehsils during the first fortnight of July.

The Standardized Precipitation Index (SPI) is a widely used index to characterize meteorological drought on a range of timescales. On short timescales, the SPI is closely related to soil moisture, while at longer timescales, the SPI can be related to groundwater and reservoir storage. The SPI can be compared across regions with markedly different climates. It quantifies observed precipitation as a standardized departure from a selected probability distribution function that models the raw precipitation data. The raw precipitation data are typically fitted to gamma or a Pearson Type III distribution, and then transformed to a normal distribution. The SPI values can be interpreted as the number of standard deviations by which the observed anomaly deviates from the long-term mean. 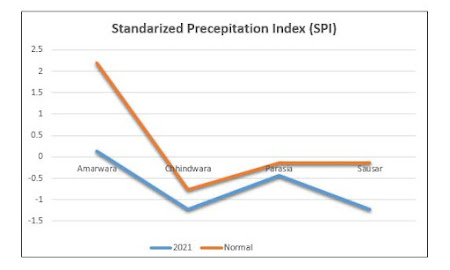 ·  Standardized Precipitation Index (SPI) shows normal condition in the current year on comparison of normal years, however Chhindwara and Sausar tehsils showing near normal condition during the month of July 2021. 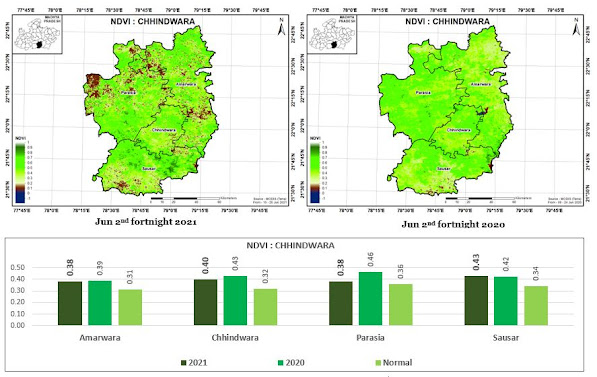 ·         NDVI values in the current year are lower than the previous year in the 2nd half of the month June in the major tehsil. While it is higher in all the tehsils as compared to the normal. 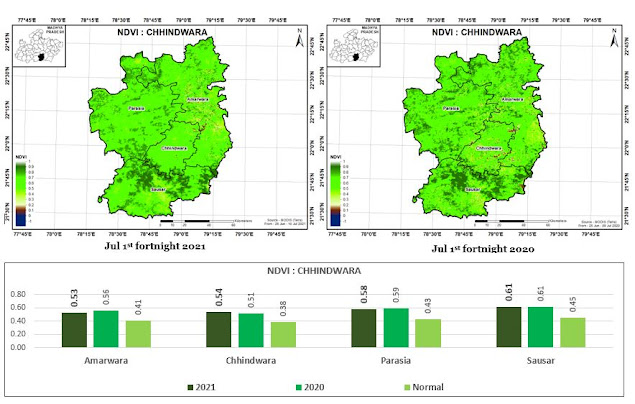 ·         NDVI value remains short of the previous year in the first fortnights of July and depicts leading the compared with the normal. 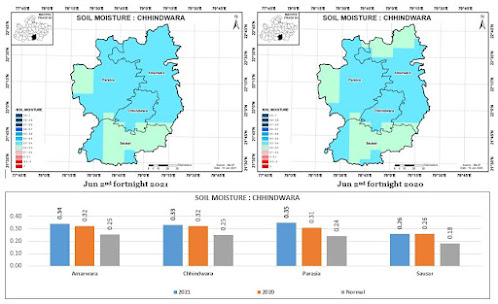 ·         Soil moisture value seems to have increased gradually during the second fortnight of June on compared with the previous year and normal 2021. 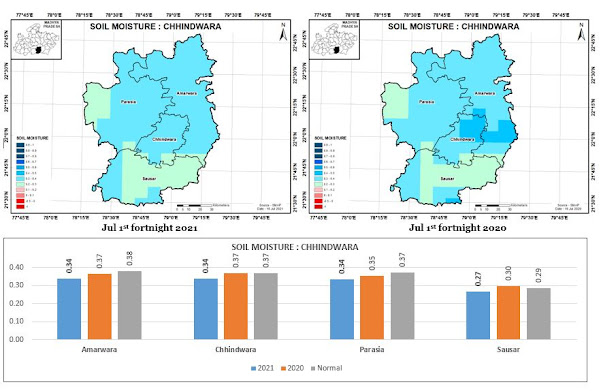 ·         Slightly lower soil moisture values are witnessed in comparison to the previous year and the normal all through Chhindwara district during the 1st fortnight of July 2021.

We at BKC Aggregators run an App called FASAL SALAH connects us with lacs of farmers on a one-to-one basis. We provide to the farmers' weather linked advisories based on his soil, his variety, date of sowing using artificial intelligence Farmers also send their drop pictures for us to run ML programs to improve advisories further.

Pradeep Raghuwanshi, a farmer at FASAL SALAH from Chaurai tehsil of Chhindwara district in Madhya Pradesh reported that the maize crop in his field has attained optimum growth and the condition is quite good. He has sown in 10 acres of area and it is comparatively lower than previous years.

Another farmer Vilas Kumar from Chhindwara reported that he has sown maize in 4 acres of land instead of 5 acres, which he used to block for maize. This year, he shifted to moong and soybean crops in the hope of a better price as compared to maize crop. 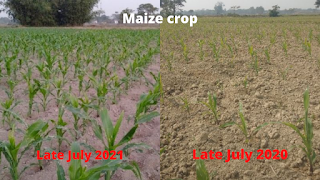 Rakesh sanodiya, a large-scale farmer from Chhindwara district has cultivated maize in 18 acres but he used to sow in 20 acres in previous years. According to him, Vegetative growth is quite good and there is no such critical issues apart from slight yellowing. Rain in the month of July is normal and there is no adverse effect on the crop.

Yogesh, a young farmer from Chhindwara told that he is happy with the growth of his maize crop, which he has cultivated on 8 acres. On asking he told that in the year 2020 he cultivated maize in nearly 10 acres of land. Moisture availability is good and there is no incidence of any pest reported till date.