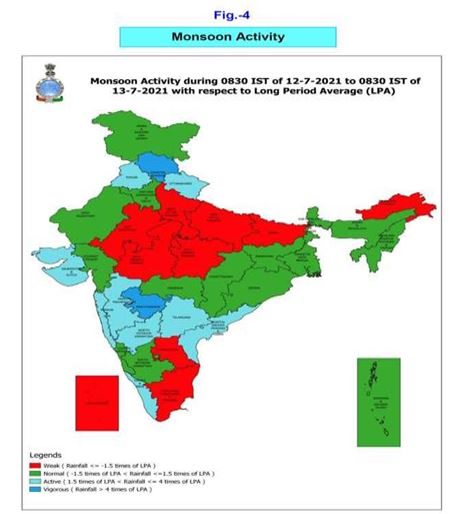 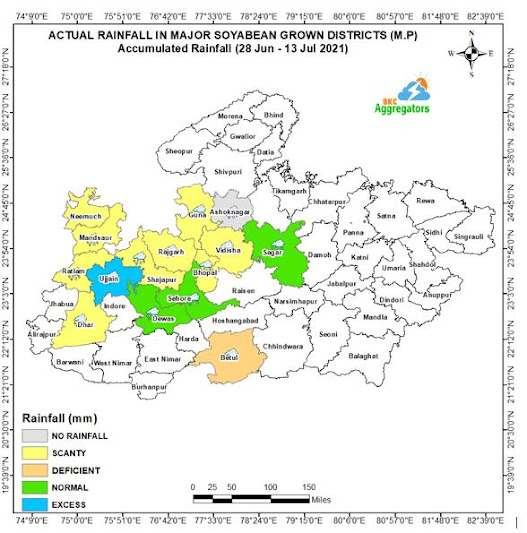 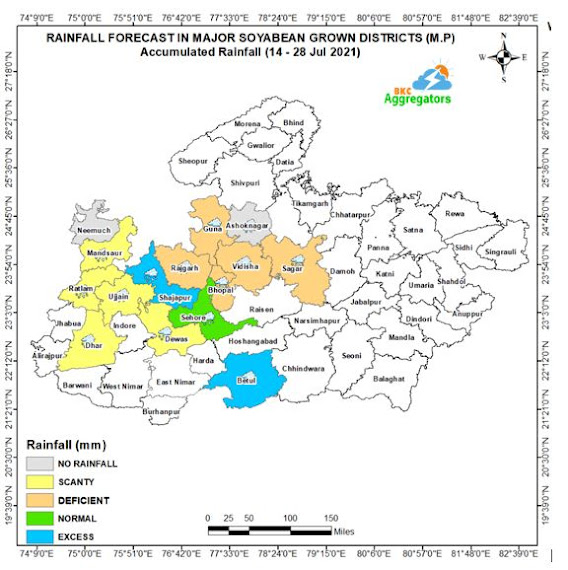 Ministry of Agriculture of Govt of India progress report on sowing of major crops dated 09 July 2021, mentioned that Soybean has been sown in an area of 82.14 lakh hectares as compared to 92.36 lakh hectares for the corresponding week in 2020 reflecting over 10% lower area under cultivation this year. Sowing has been affected because of the very high prices of quality seed and its unavailability for sowing purposes. Very high prices of beans were responsible for farmers off-loading all their stocks. There are reports that some farmers were helped by soya crushers in making seeds available for sowing. Besides, erratic rainfall has been responsible for lower area under cultivations far for soybeans this year. The rainfall forecast for the next 15 days also presents a gloomy picture over the entire MP. Except for Betul, Sehore, and Sahjapur rest of the soya belt in MP is unlikely to receive adequate rainfall to revive sowing conditions.
Farmers Feedbacks
We at BKC Aggregators run an App called FASAL SALAH which connects us with lacs of farmers on one-to-one basis. We provide to the farmers weather linked advisories based on his soil, his variety, date of sowing using artificial intelligence Farmers also send their drop pictures for us to run ML programs to improve advisories further.

One Fasal Salah user Shri Gauri Shankar Patidar of Ujjain district in Madhya Pradesh reported that he had to sow soybeans twice this year due to deficient rains in the area and failed germination.

Another Fasal Salah user Shri Yogendra Singh of Khandwa district in Madhya Pradesh told that crop was suffering because of delayed monsoon . Recent showers on 10th and 11th of July have provided some respite. He reduced the soybean area by half as compared to last year. 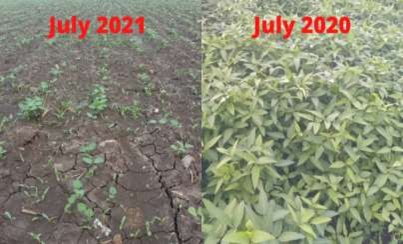 Amit Kumar, a young farmer from Narsinghpur district has mentioned that generally, monsoon rains in 1st week of July or pre monsoon showers were considered sufficient to start sowing . But this year pre monsoon showers came early at a wrong time signaling onset of monsoon which is yet to set properly and evenly. This year he has sown soybean only in 1.5 acres as compared to 5 acres last year because of  germination problems.

A farmer from Vidisha district of Madhya Pradesh said that more than half of the plants are facing issues like yellowing or drying of leaves. He will shift to other crops like moong and has reduced sowing area from previous year.

Similar sentiments were echoed by several other farmers in his own village.

Ghanshyam Singh, a soybean farmer from Ujjain district reported that he has sown the soybean seeds in same area as in previous years but growth of crop is disappointing him due to lack of rainfall.

Soya crop in MP is going to be much lower on account of lower acreage as well as deficient monsoon so far.

Weather forecasts for next 15 days does not offer any hope for reversal of the trend.