BEARISH IN WHEAT AND HIKE IN MUSTARD MARKETS ENCOURAGING THE INDIAN FARMERS TO SHIFT TOWARDS MUSTARD CROP.

Wheat in Delhi Lawrence road offered at Rs. 1760 Vs Rs. 2225 per quintal in last year at same time and in Kota at 1870 per quintal Vs Rs. 2175 per quintal in 2019. Prices of wheat in Indore rose at Rs. 1810 per quintal comparatively to last few days as arrivals declined. A marginal rise in demand ahead of the festival season also supported prices. Arrivals are pegged at 800 bags (1 bag = 100 kg) compared with 1,000 bags. Prices increased in Jaipur, too (Rs.1780 per quintal), as arrivals fell slightly amid firm demand. In Jaipur, arrivals are pegged at 1,200 bags as against 1,400 bags. Arrivals of wheat are likely to fall steadily in the coming days as farmers and stockists have exhausted their inventories. Wheat prices are likely to rise further in the coming weeks as bulk buyers expect demand to increase during the festival season.

Good wheat production in Australia will influence the India wheat trade and prices which are already below MSP. Recently Govt. of India also bans the blending of other edible oils with mustards oil which leads the mustard prices above the MSP, this hike encourages the farmers to shift their crop from wheat to mustard. That situation could adversely influence the India wheat market and compulse India to import wheat from other country in future. Under the newly launched Mustard Mission, the government has set a target to achieve a record-high 7.5 mln ha area under the mustard crop in 2020-21 (Jul-Jun) rabi season. This exercise is part of the government's mission to attain self-sufficiency in producing oilseeds so that it can curtail hefty imports of edible oils. This year the Centre aims to harvest an all-time-high 12.5 mln tn crop of mustard, which accounts for over 80% of the total rabi oilseed output basket.

Wheat MSP hike is lowest in last 10 years: Cabinet has approved 2.6 % hikes in MSP for wheat. Last year, MSP for wheat had seen a 4.6% increase. The MSP for wheat will be increased by 2.6% or Rs. 50 per quintal to Rs. 1,975 per quintal for the upcoming Rabi or winter crop season, against Rs 1,925 last year. This is the lowest ever hike in wheat MSP in the past decade — Rs 1,925 to Rs 1,975 per quintal is just nominal increase. PDS wheat is trading currently at Rs 1,600 per quintal in the open market against Rs 2,200 per quintal in April this year. With a surge in wheat delivery through the Public Distribution System (PDS) among the Smart Ration Cardholders during the lockdown, the prices of wheat, flour, maida and suji have fallen by more than 20%.

As harvesting gets underway in Australia, the country’s expecting to have its biggest wheat crop in four years after ample rains on the east coast earlier in the season boosted yields. 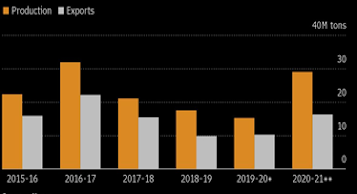 Exports are poised to surge. Farmers in New South Wales and Victoria states are particularly well placed for bumper crops thanks to drought-breaking conditions. New South Wales is now set for a record season which recently lifted its national forecast to over 30 million tons, more than double last year. Australian wheat will find a home in Asian markets, especially as a recent free trade deal with Indonesia paves the way for increased sales to a country that is already one of Australia’s biggest wheat export destinations.

Russian winter-grain plantings are set to reach a record, dryness is fueling concerns about how much of the crop will emerge and develop enough before freezing weather sets in. From Aug. 1 to mid-October, rainfall was about a 10th of the 30-year average in Rostov-On-Don and Stavropol.

Russian wheat export prices rose for the fourth consecutive week last week after dry weather in several regions and high demand from importers. Russian wheat with 12.5% protein loading from Black Sea ports and for supply in November was at $257 a tonne free on board (FOB) at the end of last week, up $6 from the previous week.  Russian domestic prices for wheat continued to climb sharply amid strong demand both from domestic consumers and exporters. 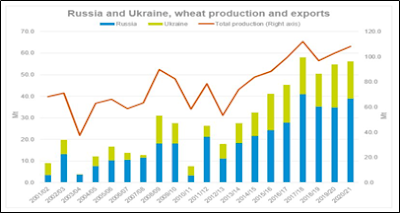 High demand from importers and rapid wheat exports have helped Ukraine's 2020 milling wheat export prices to increase by about $7 a tonne over the past week. Ukrainian 12.5% protein Black Sea wheat prices stood at $255-$258 a tonne free on board (FOB) at the end of the week. For lower-quality 11.5% protein wheat, prices were between $253 and $256 a tonne FOB. Ukraine exported 20.5 million tonnes of wheat in the 2019/20 season. Ukraine accounts for about 16% of global grain exports and sold 56.7 million tonnes of various grains to foreign buyers in the 2019/20 season