Weather continues to be inclement.

The western end of the monsoon trough runs close to the foothills of the Himalayas. It continues to pass eastward across Uttar Pradesh, Jharkhand, Odisha, and into northeast Bay of Bengal, where a Low Pressure Area exists. A Low Pressure Area cantered in northeast Bay of Bengal progresses westward absorbing another Cyclonic Circulation located around coastal Odisha. Heavy to very heavy rain is likely over Odisha and Chhattisgarh on Monday, over Madhya Pradesh on Tuesday, Uttar Pradesh and the adjoining area on Wednesday. 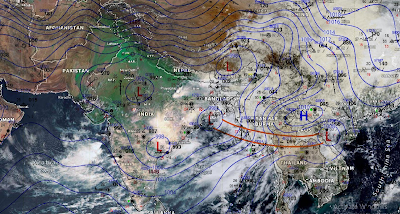 Timely and quick spread of monsoon this year did help boost the kharif acreage, but the heavy spell of rains witnessed across several parts of the country over recent weeks has  spoiled bumper kharif  harvest. The extreme weather events such as heavy rains in some parts of the country has affected the standing crops.

Standing seasonal crops such as paddy, maize, pulses, oilseeds, fruits and vegetables among others have been impacted on over 21 lakh ha across 15 States. States such as Gujarat and Madhya Pradesh, which faced heavy rains and flooding in several regions, have not yet quantified the crop losses. Cumulative rainfall for the country, as a whole, till date is 7 per cent more. About 9 per cent of the districts have received large excess rains, while 21 per cent have received excess precipitation.

Bihar topped the list of the States where maximum crop damages have been reported, followed by Karnataka and Odisha. In Bihar, standing crops such as paddy, maize, fruits and vegetables have been impacted on over 9.22 lakh ha. Karnataka has reported crop losses on about 3.31 lakh ha; paddy, red gram, green gram cotton, ragi, bajra, millets and soyabean have been impacted by excess rains. Odisha has reported losses in paddy and horticulture crops on 2.21 lakh ha.

About 1.7 lakh ha have been damaged in Maharasthra, where cotton, jowar and turmeric among other crops are affected.  In Telangana, kharif crops have been impacted on 1.43 lakh hectares. In Andhra Pradesh, crops such as banana, onion, tomato chillies grown on 52,000 hectares have suffered damage. In Punjab, about 24,403 hectares with crops such as cotton and paddy have been damaged, while Tamil Nadu has reported losses on 787 hectares affecting paddy, maize and gingelly among others. Kerala has reported crop losses on 4,754 hectares, while Arunachal Pradesh has suffered crop damage on 6,864 hectares.

In Madhya Pradesh, soyabean, maize, arhar, urad, moong and paddy have suffered damage. Earlier, the soyabean trade had projected a crop loss of 10-12 per cent in the State due to heavy rains this year.

Paddy acreage continued to rise in Bihar, Karnataka and Tamil Nadu as transplantation of the main cereal crop for the kharif season has entered the last phase. Total acreage under paddy moved up to 406.97 lakh ha, an increase from the previous week’s 402.25 lakh ha. Total kharif acreage so far stood at 1,113.63 lakh ha, which is an increase of 5.71 per cent over corresponding last year’s 1,053.52 lakh ha.

A loss of 10-15 per cent is likely to occur in soybean crops in Madhya Pradesh, which is a top producer of the commodity in the country. “Major damage is seen in soybean, which is the largest grown Kharif crop in the state. Heavy rains have also hit moong and urad crops in key growing regions.

Excess rain has impacted the harvest of onion and moong crop in the major producing regions of Karnataka and Maharashtra as well. Heavy damage has been recorded in both states, which have increased acreage of the crop this year. In Karnataka, moong has been sowed on 3.85 lakh hectares which is about 50 per cent higher than the previous year. Similarly, in Maharashtra, the area under moong has gone up by 19 per cent to 3.84 lakh hectares.

The rains over the past two months has severely impacted farmers. The extreme rains in August have damaged crops across 1.6 lakh hectare. Belagavi, Bagalkot and Haveri which are among the worst-hit districts, where various crops are under floodwaters. Continuous rains have impacted the harvest of moong crop in major producing regions of North Karnataka and parts of Maharashtra as fresh crop is highly perishable due to higher moisture content. 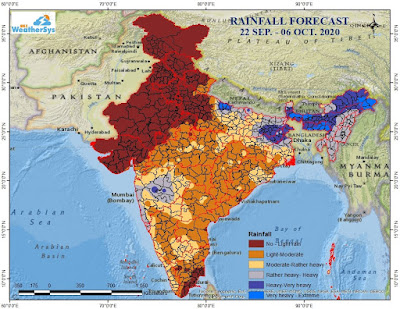 In Chhattisgarh, Farmers are advised to go for third dose of urea (40 kg/ha.) fertilizer in medium and late duration rice crop at 60-75 days, top dressing only after control of insects and disease. Also go for 25% potash top dressing to increase rice grain quantity and quality.

In MP, in some of the areas, early maturing soybean varieties are ready to harvest; harvest the soybean crop (immediately after change in pod colour) in order to minimize the yield losses due to shattering as well as to prevent quality deterioration due to rains; store harvested crop in safe place covering it with Tarpolin. Carry out transplanting rainy season onion in the prepared fields; ensure proper drainage in the fields.

In East Uttar Pradesh, continue nursery sowing of tomato (hybrid variety), gobhi and Knol khol, sowing of radish, use 6-8 Kg/ha seeds for sowing. Remove weeds from the orchard and apply recommended dose of manures and fertilizers to the fruits trees depending on the plant age. In vegetables (like brinjal, tomato, cauliflower, cabbage etc), for monitoring of borer, Diamond Back moth (DBM) insects, farmers are advised to use pheromone trap @ 3- 4/acre.

Moderate to heavy rains are also expected over West Bengal, Bihar, Jharkhand, and Odisha. Punjab, Delhi to remain dry with isolated rainfall over some places.   In Bihar, carry out hand weeding in rice field. To control leaf folder or stem borer in paddy, broadcast Cartap hydrocloride, 25 kg/ha when sky is clear. Continue transplanting of ready seedlings of brinjal, tomato, chilli, cauliflower and cabbage.

In Jharkhand, timely sown crops like green gram and black gram are at maturity stage; harvest them during clear weather and after harvesting, sow the seeds of rapeseed (toria) as rainfed crop after preparation of the field. Continue sowing of early potato and table pea may select suitable field and sow the seeds on ridge.