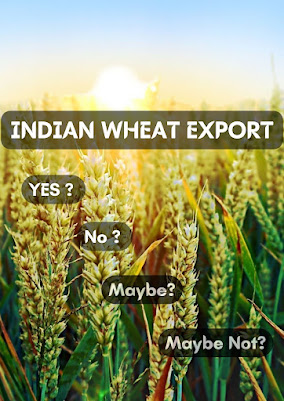 Recent ban on wheat export has come as a jolt for traders and farmers. The decision was taken under the purview of India’s food security concerns, in the wake of the sudden hike in domestic prices, Government decided to ban export of wheat.

Later the ban was relaxed to accommodate genuine wheat export contracts backed by SWIFT certified LCs established before the ban kicked in. Euphoria among farmers to have received prices well above MSP for the first time in many years soon evaporated.

One of the stated reasons for export restrictions is lower expected production during 2021-22 season because of unusually hot temperature in Feb-Mar 2022.

We BKC set out to analyze the losses in yield because of hot weather.

We BKC are connected with farmers in one-to-one basis through our App Fasal Salah for day-to-day advisories. We also run crop model for their crop which calculates expected yield in run time from sowing until harvest. We ran sample analysis for over hundred farmers and found no evidence of yield loss on account of hot weather during maturity in all major producing states of Uttar Pradesh, Haryana and Madhya Pradesh.

Analyzed yield for some sample farmers can be seen as under. 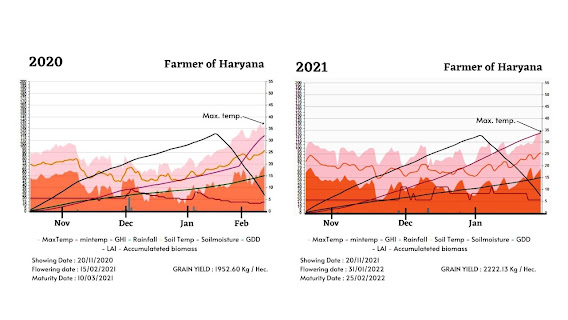 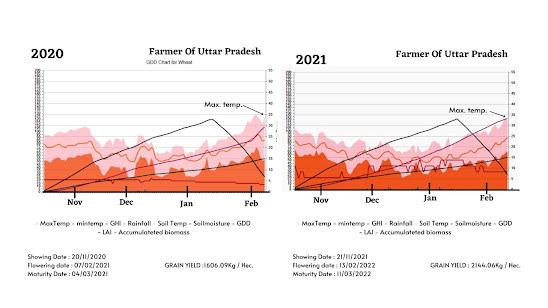 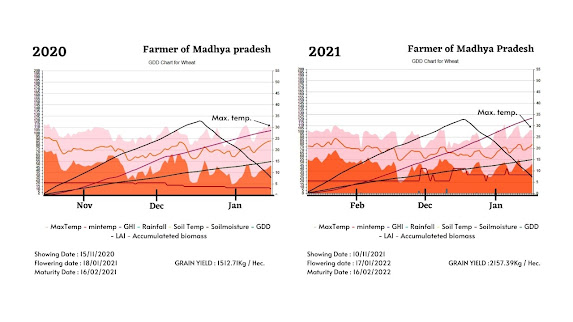 Therefore, the general conclusion being drawn that heat wave has affected the crop yield does not seem to be a correct conclusion.

Farmers seem most affected by sudden ban on wheat exports. Prices in local mandis have declined a bit but still holding firm as market arrivals are lower. Farmers are continuously watching the Stop-Go situation to sell their produce in the market. Generally, they are holding the stock in hope that prices will rise in the future. But the decision to stop wheat export suddenly seems to be hurting wheat farmers and has put exporters having firm export contracts under stress as well.

A number of traders and exporters are facing problems of cancellation of their orders on mandis while Govt. of India has initiated action against exporters whose export orders are supported by bogus LCs at the same time.

Both farmers and exporters seem to be losers.

January 29, 2019
Food security in the light of climate change is a global imperative. In developing nations, the problem is exacerbated by variable weather, lack of reliable extension services to optimize yield and fair market access. In India, most farmers do not have access to weather advisory forecasts that are hyper local to their field and timely in nature. As all farming activities are heavily dependent on weather, decisions on application of fertilizers and pesticide, irrigation, and even plucking of fruits & vegetables and harvesting cannot be taken efficiently. In addition, significant crop losses, that are entirely preventable, accrue through adverse weather events. Crop advisory services, where available, are generic and not pegged to a farmer's seed variety, date of sowing, and growing conditions and hence do not dispense timely, actionable advice, directly relevant to a farmer. Likewise, market trends pertinent to their particular crop and location
118 comments
Read more

February 07, 2019
Good, better, best and never take rest until your good becomes better and better become best; it is the principle which is followed by Dr BK Singh, who is working tirelessly for the welfare of farming community across the country. After winning the Agriculture Grand Challenge (Govt. of India) 2018, BKC Aggregators has won HDFC's Digital Innovation Summit which was organized at IIM Ahmedabad, Gujarat on 31st January 2019.   FASAL SALAH provides timely and personalised agri- advisory for the welfare of farmers, a perfect solution for several problems being faced by farmers. Using dynamic crop models and artificial intelligence analytics, BKC has been able to generate an algorithm for calculation of yields well before the harvest. Thus it is possible now to have an accurate estimate of the crop before it is harvested by the farmers. Forecasting the yield before harvest is going to become strong tool for several problems associated to the losses and difficulties being face
43 comments
Read more