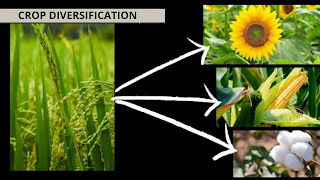 In 1947 British left India as a starving nation and State of Punjab bleeding from partition. Plagued the successive droughts and starvation deaths lead to some adventurous decisions by the Govt of India. Thanks to the then PM Smt. Indira Gandhi, Sri C Subramaniam Minister of Agriculture for their leadership and political will to allow foreign bred seeds into India for adoption on mass scale. (Today we continue to dither on GMOs). The green revolution started in mid 1960s with introduction of high yielding of Paddy verity (IR-8) ex IRRI Philippines and Wheat(K-68) ex Mexico.  Both the varieties were dwarf in height compared to crops traditionally grown in India and faced farmers reluctance in adoption.   Scientific endeavors of Dr M S Swaminathan and Norman Borlaug, backed by Innovative Extensions Methodologies invented by Dr K N Singh to roll out quickly new verities to selected hard working and innovation guzzling farmers of the then Punjab through National Demonstrations. This methodology of holding melas on demonstration plots became immensely popular in diffusing information to large number of farmers to adopt in succeeding seasons. All companies in private sector continue to adopt this till date. Those days there were no TVs. AIR and Print media played significant role besides the word of mouth as social media.

It all happened in very quick time. By 1970 food security had already been achieved and dependence on food grain imports sharply dwindled.

Farmers of Punjab (Haryana was carved out later) are known to be hard working and adventurous.   Punjab & Haryana steaked away from rest of the country to lead in wheat and rice production

Today India can take pride in having nearly 3 times the grain in stock than needed, popularly known as buffer stock.

Now from shortage we have moved to acute surplus locking up huge amount of public funds, storage losses. The excess stock augured well for the Govt in providing free rations to below poverty line families and relief to ultra-needy during Covid.

MSP regime that had been followed over years have made farmers lazy & reluctant to shift to other alternate crops despite:

2.    2. Deterioration in soil due to excessive use of chemicals and fertilizers to boost production of wheat and rice.

Hence, it’s vital to diversify the agriculture production in Punjab to wean farmers away from wheat and paddy and boost their income at the same time. The farmers of Punjab are capable of embracing this change as they are hardworking, energetic and entrepreneurial.

It is time for the government to bring about some changes in policies aimed at encouraging diversified crop farming. Exactly two years ago I was personally invited to Punjab to make a presentation in this regard. However later political developments put this state initiative in back burner. Perhaps new hugely mandated Sarkar will look at it with priority.

Some of the main points I would like to highlight are;

●       Guaranteed MSP Pricing- Government has set an MSP price for rice and wheat which makes it a profitable scenario for Punjab farmers. But such incentive is not given to other crop farming. To diversify crops, the Government needs to fix MSP prices for other crops as well like maize, oilseeds etc. with guaranteed purchase commitment and a further subsidy by Central/State Govt for initial 2 crop seasons to bring to make the alternate crops more profitable than paddy and wheat.  This will encourage farmers to grow diversified crops and boost their income.

●       Low groundwater- Farmers of Punjab and Haryana are already experiencing low ground-level water to feed water guzzling Paddy though electricity is free/heavily subsidized. A large number of Punjab farmers are already connected to us though our App Fasal Salah have expressed their desire to switch over to crops that need less water and gives a higher income. Some Kharif crops that can replace paddy are Cotton, Maize, sunflower, soybeans and even direct paddy seeding. There being no requirement for puddling and nursery transplantation and therefore will play a big role to conserve the groundwater without compromising the crop production and income generation of Punjab farmers.

ü  Between Kharif and Rabi, Zaid crops, mainly short varieties of Moong like SML 668 and SML 832 could be sown and harvested just before Rabi sowing adding to farmers income and meeting national goal of reducing imports of Pulses.

●       Crop Substitution- For Rabi, wheat could be substituted with Mustard and Pulses.

●       Aggressive Entrepreneurship promotion & subsidy among rural youth to open small crushing oil and Dall mills so that un-adulterated Mustard oil is made available in consumer packs around the country. Today farmer drive their trollies filled up with mustard seed direct to mandis from their farm which ends up in big oil mills in Agra and elsewhere in country who are den of corruption in mustard oil adulteration.

●  More Central support- It is vital for a Punjab farmer to have the support of the central government for any crop diversification. This can be given through a centralized center imparting technical knowledge of agricultural tools and information on various crops.

We as BKC Aggregators through our Fasal Salah App can play an essential yet vital role in crop diversification by imparting the right technical knowledge and crop quality. We can hand hold farmers from sowing to harvest advising him what to do from sowing to harvest based some accurate weather forecast over the specific village.

BKC Aggregators had made a presentation to Punjab Govt in this respect in the past and is ready to work with the Government. The Fasal Salah app can be used to educate the farmers and make the state extension work very easy. Its hand holds the farmers from sowing to harvest for the crops they sow, it can also be used to motivate farmers to sow the varieties and implement package of practices for these varieties.

If at all Paddy, it is recommended that Basmati paddy alone be allowed to be grown in specialized pockets. - Punjab has ideal weather as well as groundwater supply in some specialized pockets particularly near the Pakistan Border areas of Punjab like Gurdaspur, Batala, Taran Tran, Firozpur etc.  which offer ideal temperate and climate conditions for aroma and growth of Basmati Rice.

Therefore, farmers of Punjab need to embrace these changes and grow diversified crops so that the groundwater table can be replenished and boost their income simultaneously through diversification.