In Kharif season 2021-22, FASAL SALAH team carried out a study of crops grown district Bikaner of Rajasthan. Idea was to look at the crop health by using the crop pictures sent by the farmers through FASAL SALAH App and satellite pictures, which later helps us to determine the crop yield.

·         The district has a wide variety of crops grown where major Kharif crops in the region are Cluster bean (Guar), Groundnut and Pearl Millet. 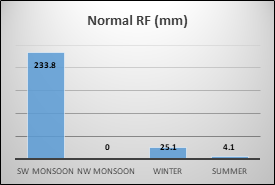 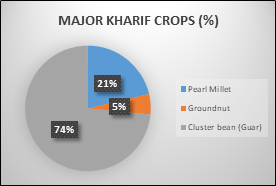 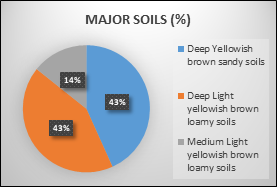 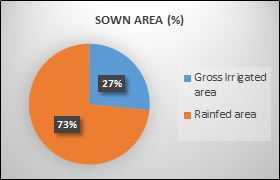 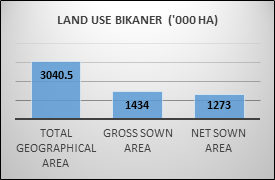 ·         A Well-marked Low Pressure Area lies over central parts of north Madhya Pradesh and neighborhood. It is very likely to move west-northwestwards during next 2 days and weaken thereafter.

·         A Cyclonic Circulation likely to develop over north Bay of Bengal on 17th September, 2021. It is likely to move west-northwestwards towards Odisha- West Bengal coast during subsequent 3 days.

·         During the next 24 hours, light to moderate rain with a few heavy spells are possible over Gangetic West Bengal, adjoining parts of North Odisha, Jharkhand, Uttar Pradesh, Parts of Bihar, Madhya Pradesh, parts of Uttarakhand, southeast Rajasthan, parts of Gujarat and Andaman and Nicobar Islands. 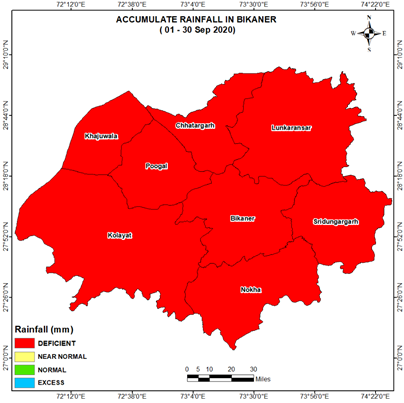 Forecast for next 15–days 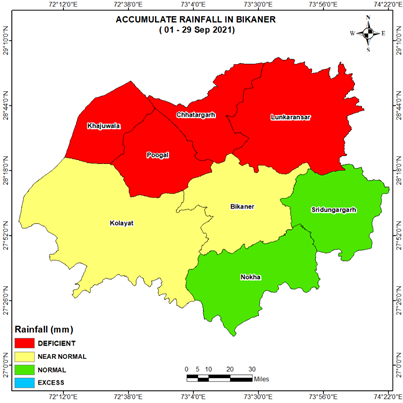 VCI is used to identify drought situations and determine the onset, especially in areas where drought episodes are localized and ill defined. It focuses on the impact of drought on vegetation and can provide information on the onset, duration and severity of drought by noting vegetation changes and comparing them with historical values. VCI value is being measured in percentage ranging from 1 to 100. The range between 50% and 100% indicates above normal condition of vegetation whereas the values ranging from 50% to 35% indicate the drought condition and below 35% indicates severe drought condition.
Flow Chart: Vegetation Condition Index (VCI) 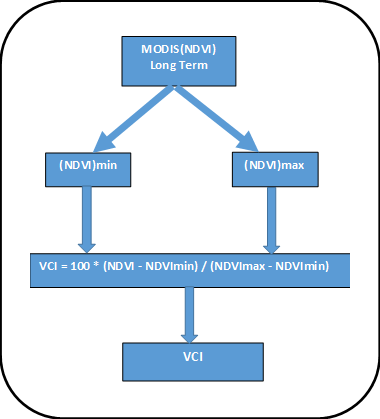 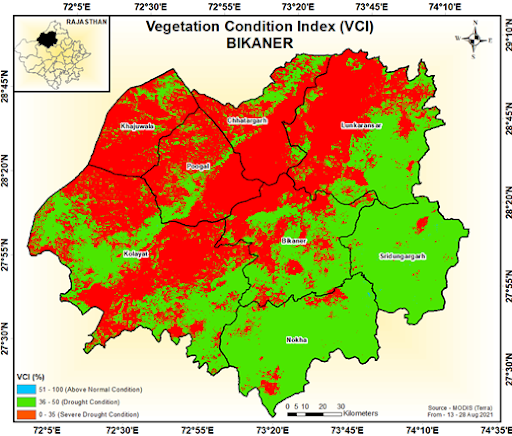 ·         Based on Vegetation Condition Index (VCI) Bikaner district showing near normal condition in north eastern side while, due to presence of desert in western part of states showing near drought condition during the month of Aug 2021.

·         Standardized Precipitation Index (SPI) shows near normal condition in majority of the blocks on compare with the normal during the second fortnight of Aug 2021.

·         Normal of rainfall in current year the index showing near unfavorable condition, while some blocks of Rajasthan like Bikaner, Kolayat, Lukaransar, Nokha and Sridungargarh showing above normal condition in normal year. 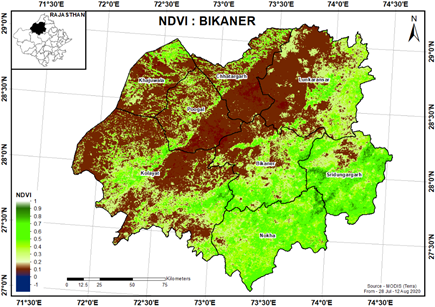 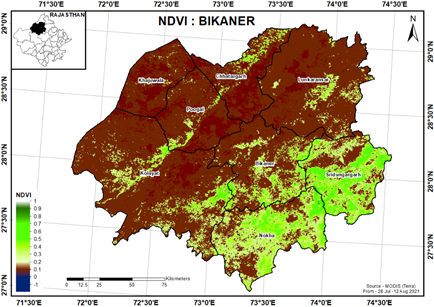 ·         NDVI values of the current year are lagging behind than that of the previous year in all over the district during the Kharif season 2021. 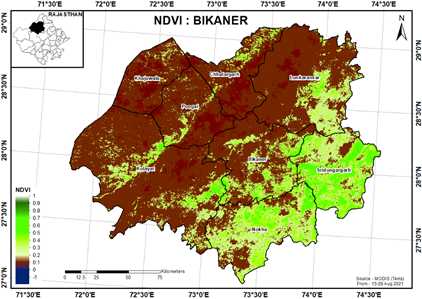 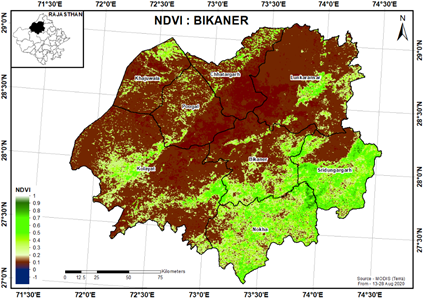 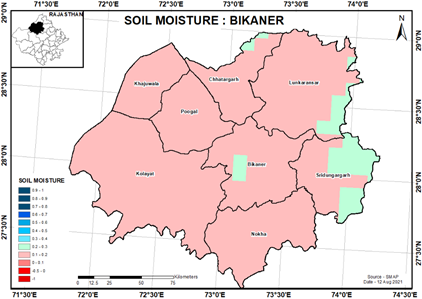 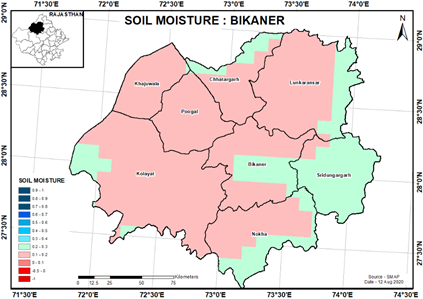 ·         Soil moisture value seems to have slightly decreased during the first fortnight of August on compared with previous year in 2021.

·         Soil moisture in the 1st fortnight August displays a picture of unhealthy moisture content throughout the district as compared to the normal. 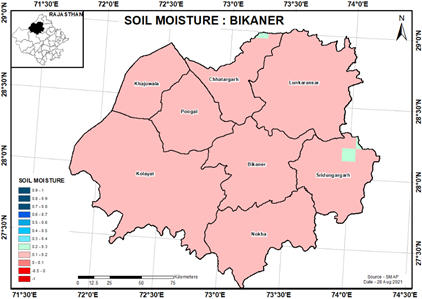 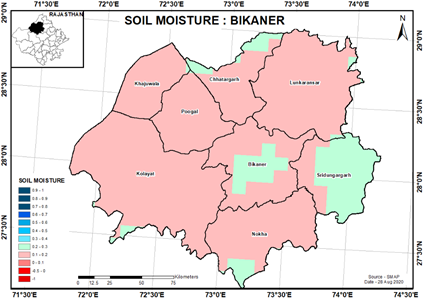 ·         All over the district displays lower moisture content with respect to the previous year during the month of Aug 2021. 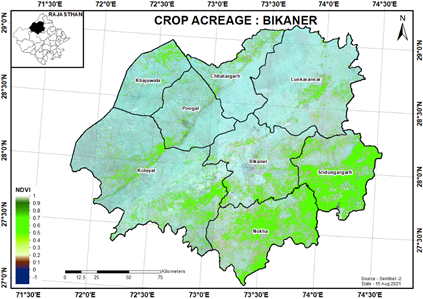 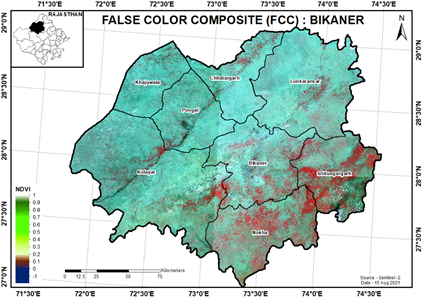 We at BKC Aggregators run an App called FASAL SALAH that connects us with lacs of farmers on one-to-one basis. We provide to the farmers weather linked advisories based on his soil, his variety, date of sowing using artificial intelligence Farmers also send their drop pictures for us to run ML programs to improve advisories further.

Babulal Barod, a farmer at FASAL SALAH from Sridungargarh tehsil of Bikaner district in Rajasthan, reported that guar crop in his field has attained growth but condition of crop is not good due to insufficient rainfall. He has sown in 3 acres of area and it is comparatively lower than previous years.

Another farmer Mukesh from Nokha tehsil  reported that he has sown maize in 5 acres of land which is nearly same as previous year. Significant pest and disease attack are visible. Lack of monsoon is one of the major concern. Even canal water are insufficient for irrigation. 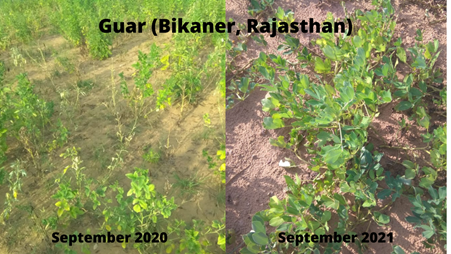 A medium scale farmer Dharmpal Rojh from Lunkaransar tehsil of Bikaner has reported about leaf of crop drying up and growth is not up to the mark. There is no sufficient water to irrigate the crop. Germination of the crop was good and vegetative growth declined due to moisture stress.