Price Outlook: Raw sugar and Arabica coffee futures on ICE closed lower on some showers forecast in drought-hit Brazil over the next few days and profit taking by funds.

·         The weather in the Centre-South region of Brazil remained a focus with some showers forecast this week although overall conditions remain dry.

·         Lower energy prices can lead to more use of cane to make sugar rather than biofuel ethanol, particularly in Brazil.

·         The global sugar supply crunch is about to get worse amid a food-versus-fuel debate playing out in top exporter Brazil.
·         The South American nation is seeing record prices for ethanol as consumers there take advantage of easing Covid-19 restrictions and travel again, increasing consumption of biofuel. That means mills could start processing more sugar cane into ethanol, rather than into sweetener.

·         The biofuel is “potentially more profitable, especially for those mills that are tight financially. Prices for ethanol at mills in Sao Paulo jumped 10% last week to the highest in data going back to 2000.

·         All of this is helping sugar to extend its scorching rally. Futures prices in New York are up 73% in the past 12 months. The staple’s rise means increasing costs for food-makers at a time when food inflation and hunger are an increasing concern around the globe.

·         Brazil can’t simply import ethanol to ease supplies, because prices are up in other exporting nations like the U.S., which is also seeing increased driving and travel as vaccinations progress. In fact, prices are so high for U.S. corn-based ethanol that Brazilian biofuel may start to look attractive. U.S. ethanol prices nearly doubled in the past 12 months.
·         For now, sugar is still more profitable than ethanol in Brazil when it comes to exports.
·         Ethanol is also getting relatively more expensive than gasoline in Brazil, which means demand may taper. Brazilian drivers use both fuels, and usually pick whichever is cheaper.

·         Another factor that could dampen the looming sugar shortage: most of Brazil’s current crop is already sold in advance in export markets. Before converting more cane into ethanol, mills would have to pay an expensive fee to cancel those contracts in Brazil. The cost could be more than 4 cents a pound, requiring Brazilian ethanol prices to rise to 21.8 cents a pound versus current levels of around 17 cents. 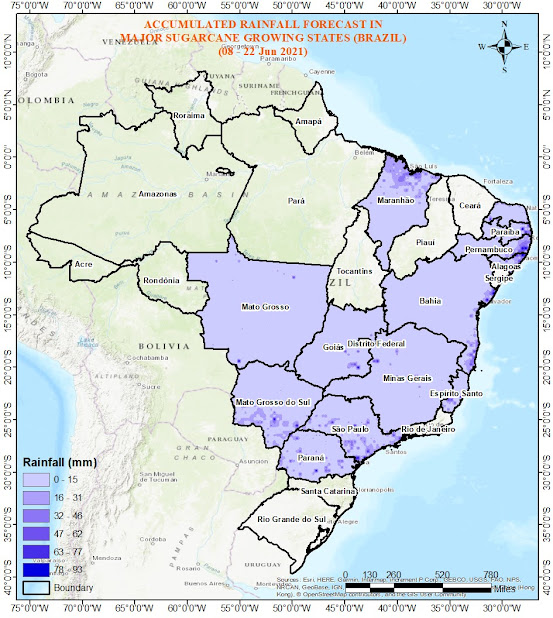 Ø  The region is starting to lose out on the beneficial aspects of rainfall as the crop continues to race through development. By mid-June, yields may be set in stone. Rainfall will still be helpful, but not for long.

Ø  Repeatedly, systems are forming in Argentina and moving into southern Brazil, producing widespread moderate showers. In addition, repeatedly, as the front approaches the border of Mato Grosso do Sul and Mato Grosso and points southeast, the showers dry up.

Ø  Brazil has just ended the third-driest summer in a century, with very little rain in March and April. The traditional dry season has just begun with low humidity, affecting the main period of sugarcane growth in the central-southern region of the country for the 2021/22 harvest.

Ø  In some sugarcane regions, such as Bataguassu (MS), it has not rained significantly for almost 80 days, while the average of the production areas of São Paulo, Mato Grosso do Sul, and Paraná has not seen precipitation for at least 30 days.

Ø  In the west of São Paulo, April rains – usually between 50 and 100 millimeters – totaled less than 10 millimeters. In the east of Mato Grosso do Sul, less than 20 millimeters of rain was recorded.

Ø  Over the next 14 days, the Brazil forecast suggests the average daytime maximum the temperature will be around 28°C, with a high for the two weeks of 32°C expected on the afternoon of Saturday 12th June.
Ø  The mean minimum temperature will be 19°C, dipping to its lowest on the morning of Wednesday 16th at 15°C. Expect the following 14 days ahead to have some days seeing a little precipitation and some days with rain.
Ø  The current forecast indicates Tuesday 8th June will have the most precipitation with an accumulation of around 11.0mm. Overall winds are likely to be light.
Ø  A frontal system prevailing in Atlantic Ocean has been providing moisture incursion in the states of eastern Brazil. Some of the most affected cities are Minas Gerais, Goias, Tolantins and southern Bahia.
Ø  As per the latest forecast, capital city of Brasilla along with Belo Horizonte and Rio de Janerio are expected to receive heaviest rainfall of the region.

Ø    The country of Brazil is facing its worst drought since the 1930s. It is interesting to note that this is the rainy season for Brazil. The drought has led to severe water shortage and has caused power outages over the area, the authorities have advised the people to reduce power consumption. The power outages are due to low levels of water in the hydropower plants.
Ø  The drought had caused major damage to Soybean and coffee cultivation with coffee harvest being significantly lower than last year.
Ø  Due to a severe drought, Brazil’s sugarcane crop is expected to reach a five-year low.

Ø  In São Paulo state—one of the worst hit areas—agribusiness represents 15% of GDP. Some farmers there say they have lost almost a third of their crops due to water shortages.
Ø  São Paulo’s producers are not the only ones affected by the drought. Minas Gerais, a major agricultural state, is Brazil’s largest coffee producer. However, the drought meant crop production fell across the board, including coffee, rice, soy, and corn.
Ø   In Uberaba, the state’s largest corn producer, the mayor declared a state of emergency last month.

·         The dry weather that prevailed between August and October 2020 damaged sugarcane fields, thus            reducing production potential. Fire outbreaks also harmed cane stocks.
·         Sugar prices have recovered since March 2020 and have remained much more attractive than                 ethanol prices. Therefore, sugar-ethanol plants should remain focusing on sugar production, and the sugar-ethanol production mix will likely be similar to the previous season. 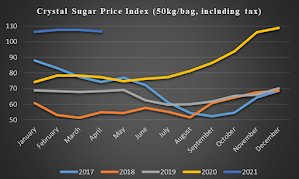 ·     The revised estimate for Brazilian exports in MY 2020/21 is 32.15 mmt, raw value, the largest volume exported by Brazil, representing roughly 50 percent of the world exports.

· As the second-largest recipient of the U.S. sugar tariff-rate quota, Brazil held a raw value allocation of 152,691 metric tons at the beginning of FY 2021, which is equivalent to approximately 14 percent of the total TRQ. Additional quota throughout the FY will depend on the U.S. crop outlook.

·      The global sugar market is expected to shift from a deficit in the current season to a small surplus in 2021/22 (Oct-Sept) as production increases in countries such as India and Thailand outweigh a smaller crop in top producer Brazil. Thailand's production to rebound 32% to 10 million tonnes. Good prices and favorable weather in India and Thailand are boosting the output.

·    Global sugar production is estimated to grow 3.9% to 190.1 million tonnes, while demand was seen rising only 0.9% to 188.4 million tonnes. If conditions related to the coronavirus pandemic improve in India, the world's largest sugar consumer, it could revise its numbers for global demand.

·         However, in Brazil, lower production and exports prevailed due to dry weather at the flowering stage of the crop that affects the overall yield and production of the crop.

·         India have glorious chance to boost sugar export in international markets defending Brazil that will too improve the Indian domestic prices.