We decided to carry out a study of the wheat crop in Vidisha district of MP in Nov 2020. The idea was to look at the crop on the ground as well as from satellite to see if size the crop and yields could be determined and advisories improved sensing moisture stress before it begins to develop.

BKC’s FASAL SALAH App is in service of Vidisha farmers. Farmers get advisories based on variety sown, date of sowing, and weather forecast of their village. Farmers also send their crop pictures as prescribed. This App uses artificial intelligence for image processing of farmers sent pictures and crop modelling analytics which BKC has established for calculation of yield and the health of the crop well before the harvest.

Farmers send the geo-located crop pictures through FASAL SALAH which helps monitor their crop growth in the different time scale for yield forecasting. This also helps to correlate the ground recorded vegetation indices with high-resolution satellite data (In this case Sentinel-2A, dated Nov 11, 2020 are used for extracting the NDVI and NDWI). However, in this phase when sowing has just begun an estimate needs to be made as to which areas have better yield potential based on satellite-based soil moisture estimation.

For instance, one GCP had NDVI of 0.1: Field has practically no vegetation. Either it has been recently sown or seeds yet to germinate fully to reflect any significant NDVI. Another GCP reflected NDVI of 0.23 indicating plants have reached the tillering stage Last GCP returned an NDVI of 0.3 indicating plants are in the late phenological stage. Fasal Salah App has a feature which seeks farmers to send pictures of their crops which are exactly geo-located and could easily be correlated with corresponding NDVI values observed from space. This enables real-time analysis of crops at different stages of growth.

Pictures are also used for analysis to improve advisories and observe any abiotic factors on crop growth. 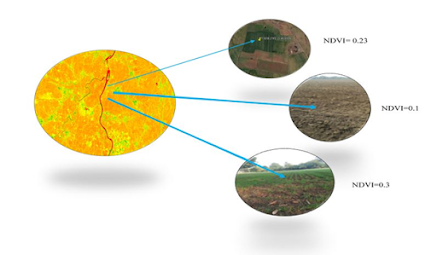 Figure 2
Fasal Salah & dynamic crop model
In Fasal Salah the farmers input the exact variety and date of sowing of the crop of which pictures are required to be sent during entire crop cycle BKC Aggregators have developed algorithm in consultation with world-renowned crop modelers taking cue for known models which combines the weather and its effect on plant growth in real-time.  Thus at the back end, one has  a fairly good estimate as to how the crop is developing in the farmer's field taking into consideration, day today temperatures, rainfall, humidity, evapotranspiration, etc, Figure 3 below is graphic representation of  one plot of land wherein wheat was sown on 2nd Nov 2020. Using this method likely yield is determinable (GDD) every day. Day to day moisture stress is estimated for automatic advisory for application of irrigation to that field.

Next step was to see how the moisture stress as observed at ground level in the crop model correlated with soil moisture observations from satellite Soil moisture plays a determinant role in germination and needed irrigation post sowing. For this exercise, Normalized Difference Water Index (NDWI) of Vidisha district was obtained from Sentinel-2A satellite data for same day as NDVI was used. Plotted NDWI values are in Figure 4 below 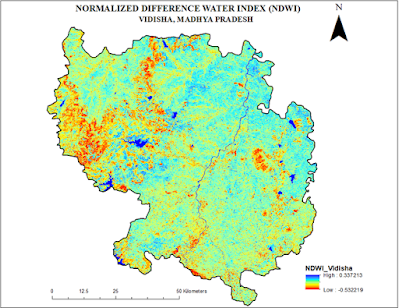 Vegetation cover on the earth surface undergoes severe stress during the drought. If affected areas are not reported in time it may cause sufficient damage & reduce the yield . Hence, the early detection of water stress can prevent many of the negative impacts on crops.  NDWI index allow us to control irrigation in real-time, significantly improving agriculture, especially in areas where meeting the need for water is difficult. Higher NDWI values ​​indicate sufficient moisture, while a low value indicates water stress.

NDWI plots showed characteristic moisture stress points in Vidisha as shown in figure 5 below which is self-explanatory. 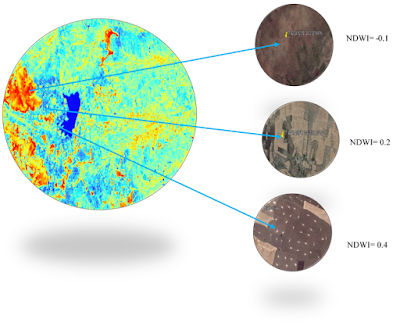 Based on three selected locations (Sironj, Basoda and Nateran) in Vidisha district, we found that Village Sironj has low positive NDWI value (0.2), indicating the lower soil moisture content. This area is highly sensitive to water stress. In these conditions crop here may experience lower yields.

Village Basoda reflects negative NDWI value. We could conclude that this land could be unsuitable for wheat cultivation unless it rains later.

Meanwhile Village Natran has high positive NDVI value (0.4), which indicate that crop the land has sufficient soil moisture content to meet the demand and potential water consumption for wheat crop and it may be expected to higher yield and production.

Unfortunately, we could not ground-based pictures as we had no farmers in these 3 villages sending crop pictures for active correlation. Based on such a duel approach of ground observation linked to  satellite data for precise locations  Fasal Salah app is able to give better advisories to farmers . Yield determination using real-time crop images from ground & crop model correlated with satellite observed vegetation growth indices helps accurately  estimating of crop yield before harvest.